When precipitation data are continuously fed into the model, simulation results will display runoff and water levels predictions at predefined desired locations. The predictions are then made available online and can be used to generate alerts via e-mails, SMS or voice messages.

Corresponding models are currently in use in "Berlin" and in "Georgsmarienhütte". 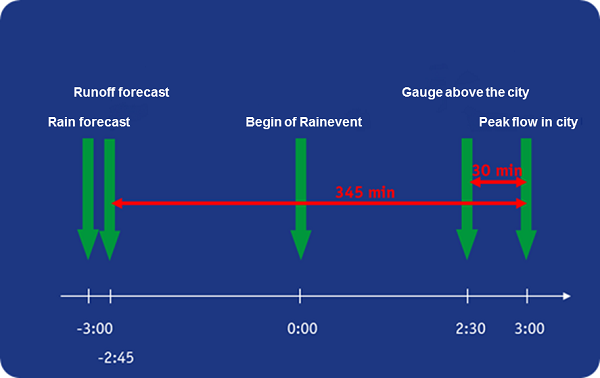 The hydrological regime of small river catchments differs significantly from the one in larger river basins. Small rivers react much quicker on heavy rainfall.

Flood forecast systems, based on water level measurements, are widely available for larger rivers like Elbe or Rhine and are not sufficient for smaller catchments. In most cases, when the gauge detects a flood, it is often too late! 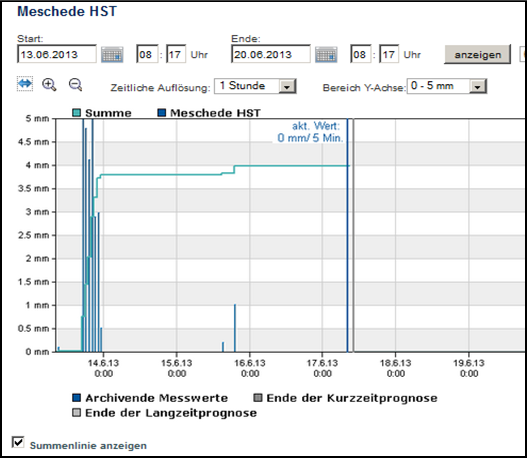 Nowadays, various national weather services provide radar-based rainfall forecasts. The data have a time step of at least 2 hours where rainfall intensity and spatial distribution can be predicted quite well.

For runoff forecast, the conventional rainfall predictions are most of the time not sufficient. In cooperation with the National Meteorological Service Meteo Group, the company HST offers an important service, where radar-based rainfall data is simultaneously calibrated using terrestrial measurements. With this improvement the rainfall prognosis can be quantified and used as an input for rainfall-runoff modelling. In Germany this service is available nation-wide ("virtual rain gauge"). 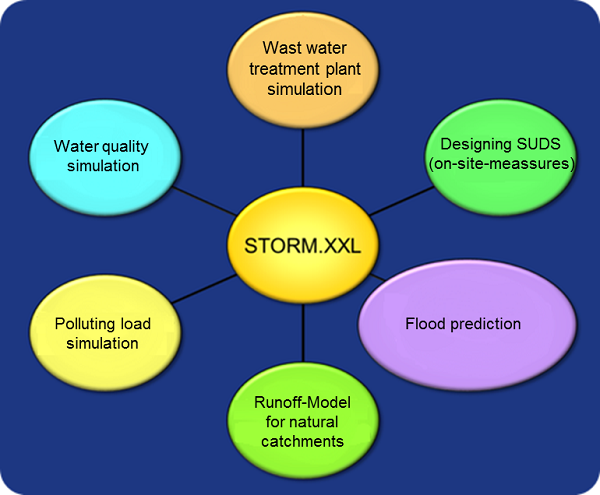 STORM is a hydrological water cycle model with various modules (see graphics).  With this tool, flood peak flows can be calculated for small urban catchments as well as for larger river basins.

Typical results of a STORM modelling are: 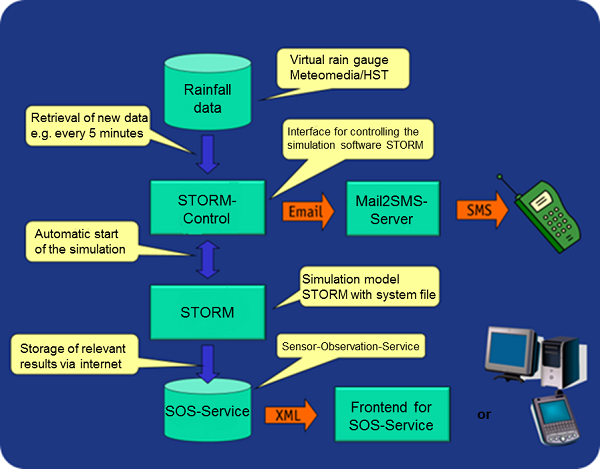 Runoff and flood predictions are made possible, even for small rivers and urban drainage systems, by linking the hydrological model STORM with the radar-based precipitation data forecasts, provided by the company HST.

The STORM simulation runs in loop, continuously using actualized data from the virtual rain gauge. The results consist of semi-continuous runoff forecasts and hydrographs, available in the web-based database.

When predefined water threshold levels are exceeded, an alarm or warning is generated and sent by emails, SMS or voice messages (s. flowchart).

Runoff predictions modelled with STORM can be visualized with the web-interface „HydroWebView©“. The service is password protected but can be made available to a large group of users.

HydroWebview has map view and a chart view features.

With „HydroWebView©“it is also possible to display simulation results for historical events. The Website is based on the open SOS-interface (Sensor-Observation-Service), which allows the visualization of various time series such as; runoff/water level measurements or results, from other simulation models. It is even possible to arrange a coupling of different models (e.g. hydrological rainfall-runoff-models with hydraulic river models) within this interface.

In addition to this, generated email, SMS or alarms can be automatically sent to rescue control centers if defined threshold values are exceeded.

The web-interface „HydroWebView “was developed in cooperation with “3s sensors systems solutions”.