TRUST: TRansitions to the Urban Water Services of Tomorrow

Nowadays the sewer system in many parts of Oslo is not adequately dimensioned. Too much sealed area has been connected to the drainage system in the last decades. Thus hydraulic stress and combined sewer overflows occur very often. Local residents complain about the bad smell from surrounding creeks and lakes.

As a consequence of the urban sprawl, increase in urbanization has a significant impact on the natural hydrology of the environment by modifying the nature of runoff, run off volumes, peak flow rates, rates of soil erosion, and transport of pollutants and sediments. As an example, in natural forested watershed as much as 50% of rainfall infiltrate the soil and as little as 10% becomes runoff. In contrast, fully urbanized watershed may experience 10-15% infiltration and as much as 55% surface runoff. Thus, the need for sustainable wastewater and stormwater management has become a priority in the political agenda.
To reduce the negative effects (flooding and pollution) of the urban drainage system alternative solutions were examined. This project focuses on emerging technologies for stormwater management to be considered by the Storm water model in providing sustainable management options (comparison of different scenarios). Therefore maps of SUDS distribution within the investigated catchments were created, which show the application of SUDS in Oslo Hoffselva.

The size of the investigated area is about 9 km². It’s divided into two subcatchments (HO10M: 543 ha and HO4HI: 348 ha). The total length of the sewer system is approximately 14 km. The investigated catchments are dominated by forest in the northern parts. To the south, the character of the catchments becomes more and more urban. Mainly single-detached houses are spread within the two catchments. In some parts multi-storeyed buildings characterize the surrounding

To identify impervious area, which can be disconnected as quickly and cheaply as possible, many different criteria must be regarded (next figure). Most of them are of spatial character. This publication describes the method of identifying disconnection potential of streets. The mentioned influencing criteria’s on SUDS were classified, assessed and overlaid (see next chapter). As a result of the applied method two different maps were developed: 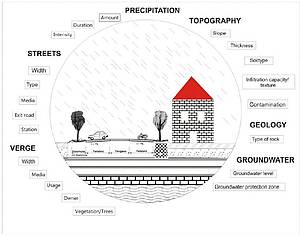 2. “Disconnection potential” maps. These maps estimate the amount of impervious area, which can be isolated from the sewer system and treated by SUDS.

STORM is a hydrological runoff model. All main components of the hydrological cycle are
included. Urban water elements and natural areas can be defined. Thus STORM is able to set up
runoff models for complete river catchments. STORM is able to calculate both time series and
design storm. Originally it was programmed for the design of SUDS. Therefore diverse typologies
of SUDS are implemented (swale, green roof, cistern etc.). It is an ideal program to calculate the
effects of SUDS to urban water hydrology (and river hydrology).

A runoff model was created for the drainage systems of the two sub-catchments in Hoffsvela. As
a base an already existing Mike Urban model was used. The STORM runoff model combines a
single sewer and manhole with sub-catchments. At certain runoff points (rain overflows,
branchings, retention basin etc.) the sub-catchments have an outflow to the next subcatchment
or receiving water. The following keywords show the main workflow
establishing the Hoffsvela model:


Effects of SUDS on Sewer System

The effects of disconnection on the overflow behaviour of rain water overflows are quite obvoius: 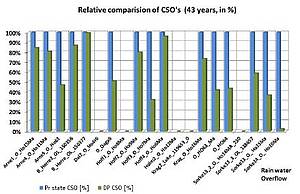 Comparision of CSOs for base and SUDS scenarios (run-off-model)

Reduction of CSO after SUDS implemenation