Whenever rain or snow falls onto the ground surface, it starts moving according to the laws of gravity. A portion of the precipitation seeps into the ground to replenish Earth's groundwater. Most of it flows downhill as runoff.

Runoff is extremely crucial in that not only does it keep rivers and lakes full of water, but it also changes the landscape by the action of erosion. Flowing water has tremendous power as it erodes and carries material within its path. Land use, vegetation, soil type, drainage area, basin shape, elevation, slope, topography, drainage network patterns are all factors affecting runoff however Landuse and landuse changes are of main concerns in respect to runoff pollution in Urban areas.

That untreated stormwater discharges from separate drainage systems can have a significant concentrations of water pollution, despite the uncertainty over the time and course of loads which is also internationally undisputed [Field, 1993], [Hahn, 1990]. In the sanitation schedule of Berlin, the objective is set for a the water quality class II having a fourth purification stage (microfiltration). This causes an issue for the waste water treatment plants if the entries from the stormwater systems remain unchanged.

A study from the US has shown that the material removal from the surface varies and depend on the local annual rainfall. The higher the rainfall, the lower the concentration. [Schueler, 2003].

It is very important to determine the concentration of emissions as this has an effect on the type of treatment (Mechanical, biological…).

Following several measurements and test results, it turned out that the filterable emissions have a high polluting potential. Yet much a more serious approach should be given to storm water pollution, considering that in heavy rainfall events several investigations showed that the amount of polluted waters could not be compensated by the central waste water treatment plant. 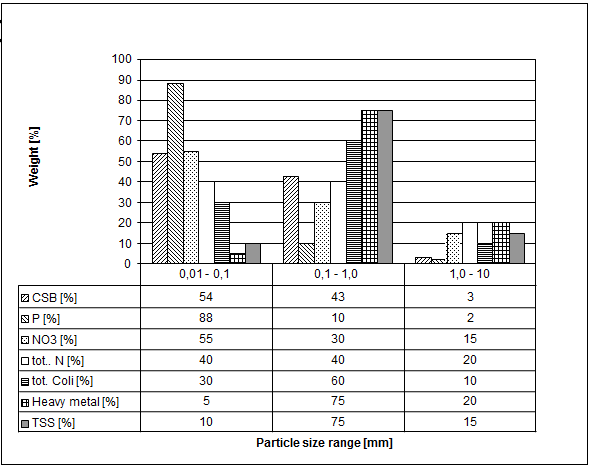 Distribution of pollutants within different grain sizes by: [Göttle 1978]


Size is a fundamental property of sediment particles. It affects their entrainment, transport and deposition, and therefore provides important clues to the sediment provenance, transport history and depositional conditions. The results of Göttle of Xanthopoulos could not confirm the direct relation between particle size and heavy metal pollution.  However; and after [Xanthopoulos, 1990] investigations, heavy metals were bound to the smallest fractions.

Studies of debris in the sediment of roads and road gullies shows that the small particle fractions have a proportionally higher content of heavy metals. Thus, investigations allow stating that content and distribution of heavy metals is defined not only by particle size of sediments but also the conditions of its accumulation, particularly, the ecological state and climatic parameters. 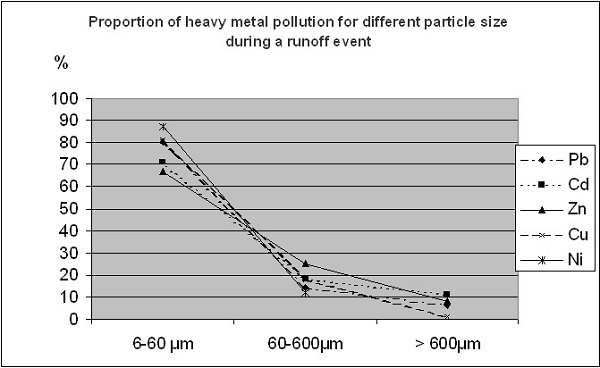 
The importance of this particular group is due to the fact that only a small portion of particles can be removed by road cleaning and thus the remaining majority mobilizes in the rainfall runoff. By contrast, the coarser constituents (1.0-10 mm) have comparatively a minor importance [Göttle, 1978]:

However, we must also consider this fraction as it is gradually crushed in the course of time by mechanical processes or decay and as a result, they can are discharged in the future. 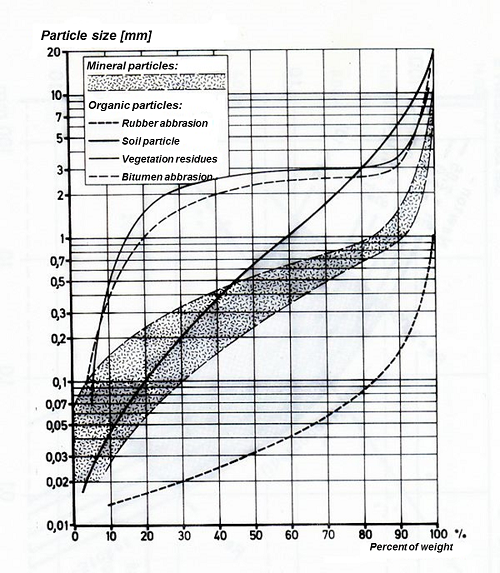 Organic and mineral particles distribution in runoff, from: [Göttle 1978] 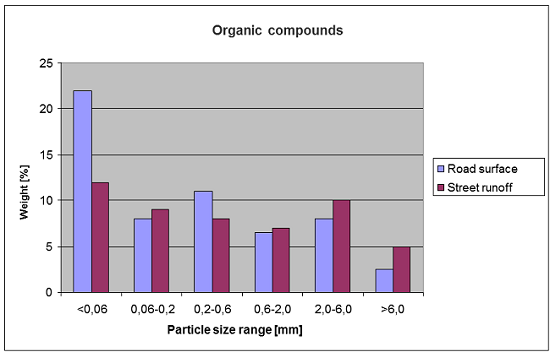 Organic compounds in stormwater runoff as a function of particle diameter, by: [Göttle 1978]


Another aspect distinguishes the total suspended solids: The investigations of [Heinzmann, 1993] and [Göttle 1978] shows that there is a moderate to high correlation between the TSS with the parameters COD (chemical oxygen demand), BOD5 (Biochemical oxygen demand) , organic nitrogen ,total phosphorus (Ptot) and heavy metals. This means that statements about other contaminants can be drawn from the simulation results of TSS.

Previous measurement programs, where the main focus was on the oxygen-depleting substances and nutrients are being overcome by  recent studies showing that, in the stormwater drainage, the importance of anthropogenic contaminants (heavy metals, PAHs etc.) should be considered .The correlation between the TSS and these "dangerous substances" is defined in (WHG §7a). It is important to note that discharges from separate sewer systems have a relatively high bacterial count. The bacterial counts in the water are in return important criterion within the EU bathing Regulation and must be considered. 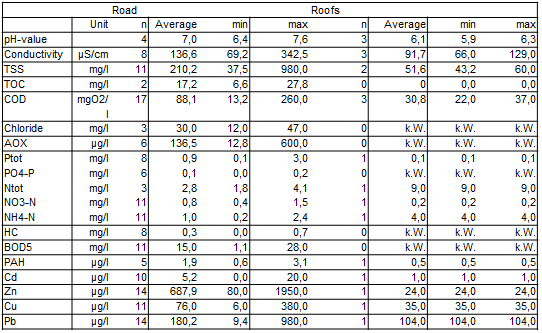 
In the literature [Grottker 1987]; it is pointed out that the high discharge values originate from street drains especially from highly frequented roads. For this, it is clear that there is a direct relation between emission and the traffic load. 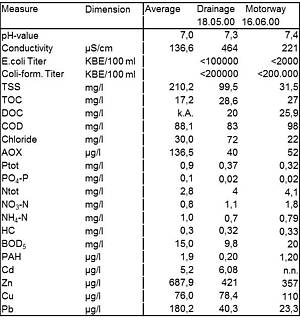 Measured discharge values of a project in Berlin


One of the most comprehensive data collection on the issue of pollutant concentrations in rainfall runoff is in the final report of the research work " Measured pollution concentrations of dry and rainy weather outflows in combined and separate sewer systems" by Hansjörg-Brombach and Stephan Fuchs promoted by the ATV / DVWK research Fund 2001 Completion: 31.01.2002 [Brombach, Fuchs, 2002].

The work includes data from a total of 176 measurements from various drainage systems, where 79 consist of separating sewage systems and 97 consist of combined sewer systems. The data comes from 17 countries with comparable drainage standards, in particular from the US and from Germany. The data are broken down to four components:

The above systems were statistically analyzed, along with data of 20 pollution parameters, shown in the following table:

The range, medians and standard deviations from concentrations of the most important parameters are shown in the two tables below. 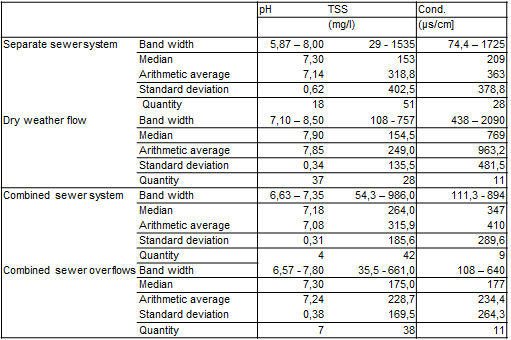 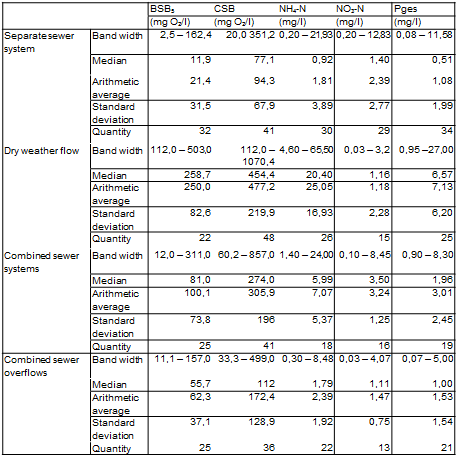