The sealing of land has increased worldwide massively since the 50s. In the course of urbanization existing settlement areas are compacted and outskirts simultaneously expand. This development is not only in the so-called megacities a problem, but can also be observed in Germany.
The share of areas for settlement and transportation in Germany grew from 11.7% in 1997 to 13.4% in 2010. Even though the increase slowed slightly, the average growth of the settlement and traffic areas in Germany is about 93 ha per day. It can be assumed that from the current 4.6 million hectares (12.8%) for housing and transport in Germany about half, in other words 2.3 Mill. ha (6.4%) is sealed, of which approximately 50% are overbuilt (UBA 2004). Here, the largest share with approximately 80% is caused by settlement expansion, only about 20% belong to new traffic areas. Since nearly half of the growth of traffic areas is based on the construction of access roads for new residential areas, the growth of urban areas cause directly or indirectly around 90 percent of total land use (UBA 2004).
Even if there is agreement on the part of policy in the aim to reduce the land consumption rate in Germany significantly to 30 ha per day in 2020 (BBR 2006), the percentage of impervious area in Germany will continue to rise. And of course these additional settlement and transport areas must be properly drained. In this respect, the responsible use of the stormwater drainage in particular from new development areas are of substancial importance.

Until a few years ago, the drainage of impervious surfaces was done almost exclusively through combined or separated sewers. The aim to provide citizens with a far-reaching "drainage comfort" is unequivocally satisfied with this system. In recent years, however, the drawbacks of this procedure shifted into attention. Two aspects have been particularly discussed, the material and the hydraulic loading of receiving waters.
Another disadvantage of the conventional drainage practice has been scarcely considered in the professional world: the impact on the water balance. Sealing and drainage not only cause higher peak flows and greater runoff volumes but at the same time a reduction of groundwater recharge and evaporation rate (see figure "change off the water balance due to urbanisation"). 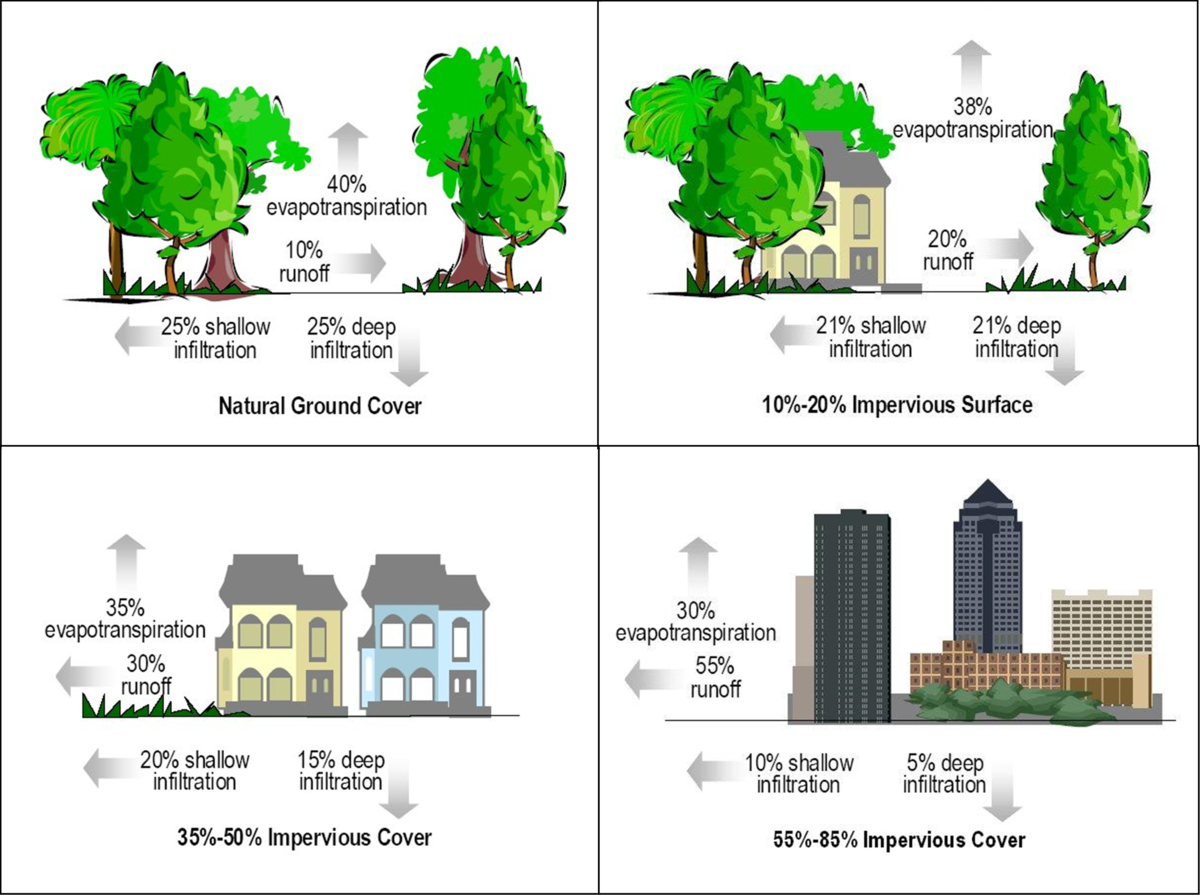 Change of water balance due to urbanization

Increasing urbanisation in conjunction with a conventional stormwater drainage exacerbates not only the flood problems but also leads to a lowering of the groundwater level and to reduced low-water runoffs. There is also a negative contribution to the heating of the inner cities ("urban heat island effect") by reduction of evaporation.
The traditional procedure is to mitigate the negative effects of sealing and drainage with the so-called end-of-pipe measures. By retention basin and central treatment facilities precipitation-related emissions and the peak flows can be reduced, creating considerable costs.
But the alteration of the water balance can not be corrected with these conventional methods. If the precipitation drainage is once diverted, a subsequent compensation for groundwater recharge and evaporation is practically impossible. 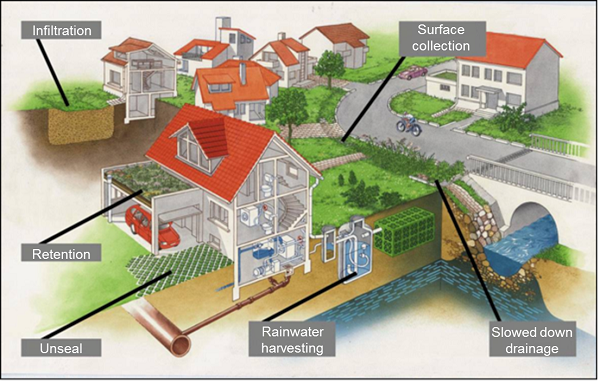 The experience from numerous pilot projects have led to a substantial gain in knowledge about the construction and operation as well as the water management effects (Sieker, Kaiser et al. 2006). Many measures already have generally accepted engineering standards (DWA-A 138 2005). The positive impact of these measures on water resources and material inputs into the aquatic environment is generally accepted; the economic benefits are widely studied and proved (Rudolph and Balke 2000).
The rainwater infiltration of newly sealed surfaces was established in law in 1996 with the introduction of the §51a in the State Water Act in North Rhine-Westphalia. Other states (e.g. Baden-Württemberg, Bavaria, Berlin) have followed in subsequent years. The rainwater infiltration was not only declared to be equivalent, but for new residential areas to be the preferred solution.
This trend is not limited to Germany. Other countries (e.g. USA, Netherlands, UK) proceeded to aim for alternative strategies for dealing with rainwater, calling them "BMP", "SUD", "lid" or "WSUD" (Förster, et Thévenot al. 2004). An international example of a BMP shows the figure "'Rain Garden' in Traverse City, Michigan, USA". 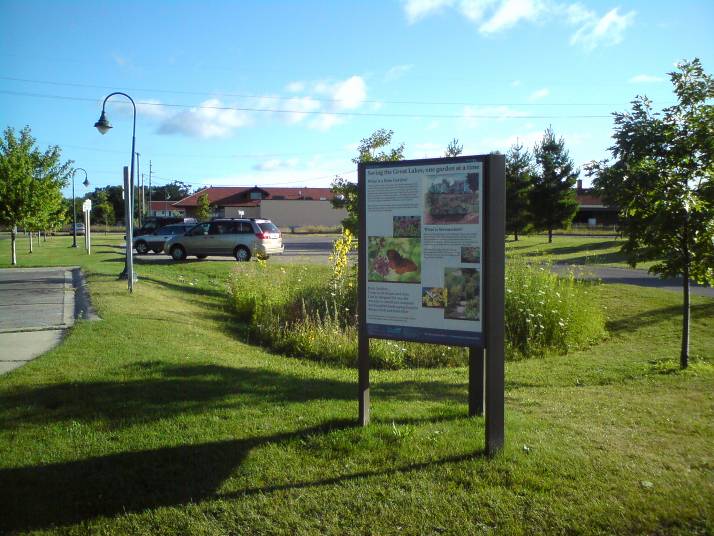 For new plannings, the semi-natural stormwater management will be the standard procedure in the future. But its implementation for existing settlements is discussed increasingly. Numerous pilot projects, for example, the Emscher catchment (Emschergenossenschaft 2003) or in the Berlin area demonstrate that a subsequent implementation is possible to some extent. The City of Munich has been a pioneer in this respect.

Press release from the Bavarian State Office for Water Management

In addition to traditional stormwater management processes (infiltration, green roofs, rainwater harvesting) new sophisticated methods have been constantly developed. One example is the system INNODRAIN® that represents an evolution of the swale-trench system (Figure "INNODRAIN® element in Hoppegarten near Berlin"). Those products are presented in widely variations on the international trade fair of the water industry, the IFAT in Munich. 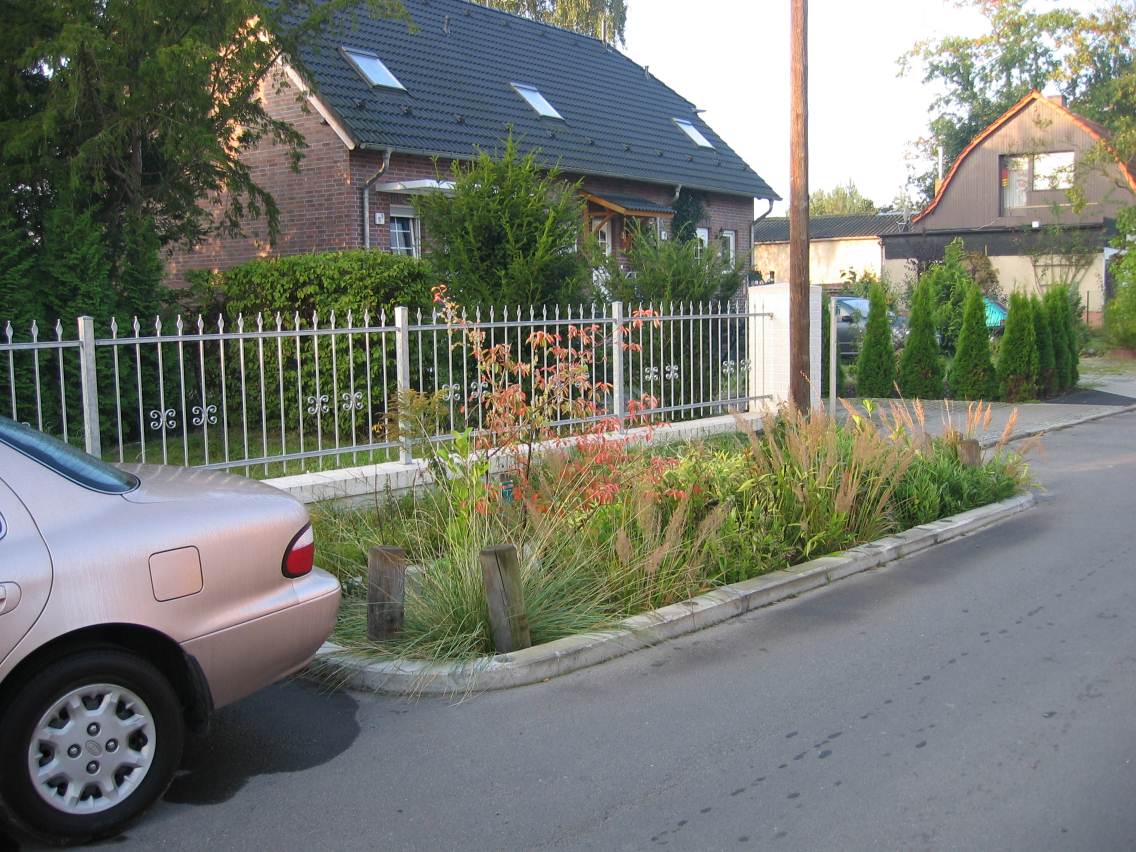 Traditionally drainage measures primarily had been targeting on drainage reliability (backwater frequency, capacity for design storms). In recent years, the objectives "material pollution of waters" and added with "hydraulic stress" were added to this list.
The water balance of an area, however, has in planning practice nearly no importance, even though the current practice of extensive drainage of rainfall runoff has a massive impact on the water balance of a catchment area. Nevertheless, the author has never faced regulations in terms of the water balance in his many years of planning practice so far. The project Munich-Freiham provides in this regard is a novelty.
The water balance plays an important role in the Water Resources Act (WHG 2010) . . Its meaning is declared in §5 "General duties of care", Section 1:

"Every person is obliged to take action in order to maintain the water balance, in case of measures that may have an impact on a waterbody, ..."

Even the Federal Soil Protection Act (BBodSchG 1998) decrees in Section 4 the requirement that "Anyone who acts on the ground has to behave so that harmful soil changes are not caused". The term "soil" includes in this law also the soil water balance.

A preservation of the natural water balance is therefore regarded by the legislature as desirable. Relevant outcomes for the planning of drainage systems in regulations, or technical rules should be based on this guiding principle. Against this background, it was proposed to introduce the long-term, average water balance as an objective for planning (Sieker et. Al., 2004). A specific request could be formulated as follows:
"The natural water balance of the catchment area should be altered as little as possible by urban drainage measures requested for permission. A variation of the water balance is to be assumed to be tolerable if the individual components runoff and infiltration of long-term average water balance do not differ by more than 10 percentage points from the natural state of the catchment area. The proportion of evaporation may accordingly not differ by more than 20 percentage points from the natural state".
The figure "Proposal for a requirement for the criterion 'water balance'" illustrates this proposal graphically. 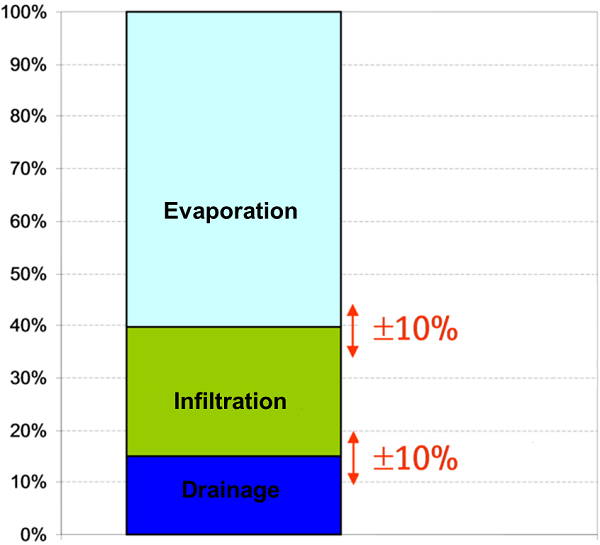 To introduce the water balance as a criterion, has significant advantages over the infiltration bidding as used for instance in North Rhine-Westphalia or in Baden-Württemberg. These paragraphs dictate certain techniques (namely infiltration systems) and disregard local conditions, in particular soil conditions. The water balance criterion corresponds to the general strategy of the German environmental law, to decree goals instead of techniques. This allows flexible solutions and promotes innovation.